28 Nov How To Stop Water Coming In Your Window Well

Water coming into a window well is the top concern we see from homeowners looking for drainage solution advice. Window wells are required for the safety and protection of people in the house. They shouldn’t be a constant source of headaches, frustration, and clean-up.

Why do window wells let water in?

There are a variety of reasons that a window well will be letting water into a home. 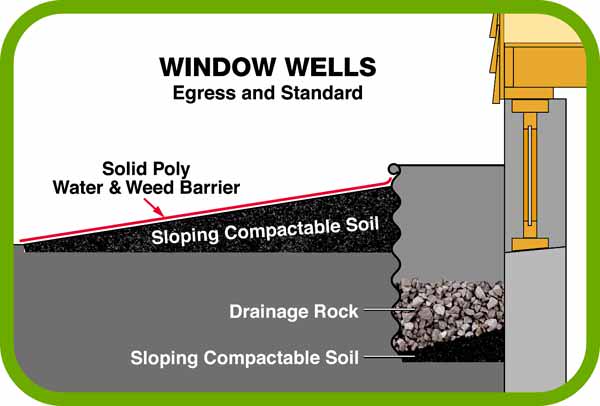 How can window wells be fixed to stop water?

We have a few different solutions for water in window wells that we’ve accumulated over the years.

The best and easiest way to fix water coming into a window well is to fix the grading around the window well. Over time, water can degrade the soil around the home and the window well so the grade tilts the wrong direction. Simply bringing in some more dirt and compacting it so it angles the correct way will often fix the water issue. We could also dig out the window well and raise it higher to allow for a higher grade and angle away from the home.

Rock at Bottom of Window Well

Ideally, there would be at least 12-24″ of rock at the bottom of a window well. The layer of rock will help hold water before it evaporates. It also just allows for more water movement just in case something happens. Digging out the window well isn’t particularly fun but it’s a necessary component.

Installing a larger or deeper window well is a common solution. A deeper well would allow for more rock at the bottom and for a higher grade away from the house at the top. Putting a plastic cover over the window well solves water issues as well. On a North or West window a plastic cover is especially helpful because that’s the direction weather often comes from. Lastly in another random solution, we’ve heard of companies putting poly plastic sheeting around the places where the well attaches to the house to prevent water from seeping in there. You could also put silicone alone that stretch as another added safe guard.